Yosemite National Park is located in the central Sierra Nevada of California. It is accessible by automobile all year, 24 hours per day. Reservations are not required to enter. However, reservations for accommodations are strongly recommended if you wish to spend the night in the park. If you are planning on driving your own vehicle into the park anytime from October through April, it is a good idea -and often required -that you carry tire chains. 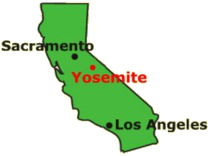 Yosemite can change a great deal in one week. One day it can be warm and sunny and days later it can be cold and snowy. From spring through fall, run-off slowly decreases as the weeks go by, sometimes it seems as if the spring and early-summer wildflowers are barely gone when the mild fall colors appear.

Yosemite is home to countless waterfalls. The best time to see waterfalls is in the spring. Peak run-off typically occurs in May or June, with some waterfalls often only a trickle or completely dry by August. The most famous among them is Yosemite Falls (2,425 ft) which flows from winter through early to mid-summer.

During your visit to Yosemite, be aware that there are people who either intentionally or unknowingly harm park resources. Please contact a park official if you see any of the following illegal acts:

Indian people have lived in the Yosemite region for as long as 8,000 years. By the mid-nineteenth century, when native residents had their first contact with non-Indian people, they were primarily of Southern Miwok ancestry. The native people of Yosemite developed a complex culture rich in tradition, religion, songs, and political affiliations. Making use of the varied local ecosystems, they used plant and animal resources to the best of their abilities. The pattern of oaks and grassland noted by early visitors to Yosemite Valley is probably a direct result of the intentional burning of underbrush practiced by native people.

Although the first sighting of Yosemite Valley by non-Indian people was probably by members of the Joseph Walker Party in 1833, the first actual known entry into the Valley was not until nearly 20 years later. After the discovery of gold in the Sierra Nevada foothills in 1849, thousands of miners came to the Sierra to seek their fortune. Their arrival resulted in conflict with local native people who fought to protect their homelands.

Writers, artists, and photographers spread the fame of "the Incomparable² Valley" throughout the world. A steadily increasing stream of visitors came on foot and horseback, and later by stage. Hotels and residences were constructed, livestock grazed in meadows, orchards were planted, and as a result, Yosemite Valley's ecosystem suffered.

On June 30, 1864, President Abraham Lincoln signed a bill granting Yosemite Valley as an inalienable³ public trust. This was the first time in history that a federal government had set aside scenic lands simply to protect them and to allow for their enjoyment by all people. This idea was the spark that allowed for Yellowstone becoming the first official national park a few years later, in 1872.

Later, John Muir's struggle against the devastation of the subalpine meadows surrounding Yosemite Valley resulted in the creation of Yosemite National Park on October 1, 1890. The day of the horse-drawn stage drew to a close in 1907. Cars were not officially permitted until 1913. Impacts resulting from increasing visitation in Yosemite Valley became apparent. People camped throughout meadows and dramatically increasing automobile traffic driving on unpaved roads left the Valley dull with dust each summer.

Visitation exceeded one million in 1954 for the first time, and by 1976 over two million people visited Yosemite. In the mid-1990s, visitation topped four million. In the early 1970s, the National Park Service established one-way road traffic patterns. Today there are five entrances to the park.