Bodie – a ghost town in California

Bodie was named after Waterman S. Body (also known as William S. Bodey), who discovered gold here in 1859. The town of Bodie became famous with the decline of mining along the western slope of the Sierra Nevada. Prospectors¹ crossing the eastern slope in 1859 to search for gold, discovered what was to be the Comstock Lode at Virginia City and started a wild rush to the surrounding high desert country.

By 1879, Bodie boasted² a population of about 10,000 and was second to none for wickedness, badmen, and "the worst climate out of doors." One little girl, whose family was taking her to the remote and infamous town, wrote in her diary: "Goodbye God, I'm going to Bodie." This phrase came to be known throughout the west.
You can see the Standard Mine and Mill on the west slope of Bodie Bluff. Because the old mill buildings and surrounding area are extremely unsafe, they are closed to the public.

Today more than 200,000 people a year visit this genuine California gold-mining ghost town, where more than 170 buildings are protected in a state of "arrested decay" on more than 1,000 remote acres. 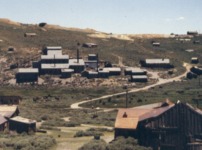 Bodie State Historic Park is open year round. It opens at 8 am every day but closing time changes seasonally (mid summer closing is at 7 pm, mid-winter at 4 pm). However, because of the high elevation (8,375 feet), it is accessible only by over-snow equipment during the winter months. Many four wheel drive vehicles get stuck each year in powdery snow that is deeper than it first appears. Spring thaws bring mud, and wheeled vehicles are not advised.  Snowmobiles must stay on designated roads within the park. Winter weather is often unpredictable. Sub-zero temperatures, strong winds and white-out³ conditions are not uncommon. 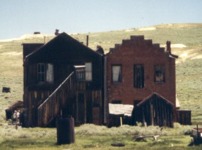 You have to pay $3.00 per person to enter the park, pets must be leashed. There are no services, camping, lodging, food vending or stores. There is one bathroom, one museum open during the summer where books on Bodie and a few other items are available for sale.
The park is northeast of Yosemite, 13 miles east of Highway 395 on Bodie Road, seven miles south of Bridgeport.

Text used with the permission of DesertUSA.Com