The Making of Mount Rushmore

Mount Rushmore National Memorial is as much a product of dreams and determination as it is the work of a talented sculptor. In 1923, Doane Robinson had a vision of a massive mountain memorial carved from stone so large it would put South Dakota on the map. Robinson spoke to local organizations and wrote letter upon letter. Many South Dakotans believed that a colossal sculpture would attract thousands of visitors with heavy wallets. Others found the notion ludicrous.

Norbeck, a frequent visitor at the White House, had the admiration of his peers in the Senate as well as that of the farmers and ranchers of South Dakota who had sent him to Washington.

Sculptor Gutzon Borglum, one of America's most prolific artists, received a letter from Robinson proposing the project in August 1924. Borglum lived for visions, so he accepted Robinson's offer.

They selected four great presidential figures for the carving.

Borglum soon embarked on a site-searching trip to find a grouping of rocks massive enough to support a giant sculpture. He and his party climbed Harney Peak. At 7,242 feet, this is the highest point between the Rockies and the Swiss Alps. The surrounding vista inspired him.

›Here is the place!‹ Borglum exhorted. ›American history shall march along that skyline.‹

He set his sights on the cliff known as Mount Rushmore. It had southeastern exposure, giving it direct sunlight most of the day, and was made of sound granite relatively free from fracture. Borglum carefully explored the crevices and sampled the rock of Mount Rushmore. With each test, he reconfirmed that he had found his mountain.

In the spring of 1927, President Calvin Coolidge decided to spend his three-week summer holiday in the Black Hills. On August 10, the president rode horseback to the mountain, sporting cowboy boots and a 10-gallon hat given to him by local residents. After listening to the President's speech, the 60-year-old Borglum climbed to the mountain's craggy summit and symbolically drilled six holes to mark the commencement of carving.

The Mount Rushmore dream would embrace the remaining 14 years of his life and leave a monument unlike any other. As the four faces emerged from the granite, the men who helped carve the memorial began to share the sculptor's dream. These unemployed miners became caught up in a challenge that would produce a national treasure. In the six-and-a-half years of work that occurred on and off between 1927 and 1941, Borglum employed almost 400 local workers. Some built roads, ran the hoist house, generated power or sharpened thousands of bits for the pneumatic drills. Others set dynamite charges or completed delicate finishing work on the sculpture.

After Borglum's death, his son, Lincoln, spent another seven months refining the monument. On October 31, 1941, he stopped construction on the sculpture, leaving Mount Rushmore as we know it today: a truly American icon.

Mount Rushmore represents the largest work of art on earth. Each face is 60 feet high, compared to the head on the Statue of Liberty, which is only 17 feet tall. Amazingly, there were no deaths and only a couple of injuries during the entire period of carving at Mount Rushmore. This is a remarkable safety record considering the workers regularly used dynamite and heavy equipment. 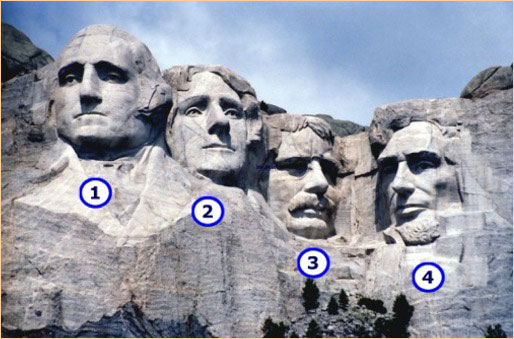 As ›father of our country‹ and the nation's first president, George Washington earned his place as the foremost figure in the presidential portrait. Washington is remembered for helping the nation achieve its independence from England and for ensuring that Americans have a representative form of government.

Jefferson was ultimately included by Borglum because of his vision of an America that spanned from coast to coast. As depicted on Mount Rushmore, Jefferson is looking to the heavens, emphasizing his reputation as a visionary and philosopher.

The only presidential selection to draw any measure of criticism was that of Theodore Roosevelt, the nation's 26th president. Some academics argued that history had not yet judged the Roosevelt presidency (he had been dead only eight years). Roosevelt had realized the dream of Christopher Columbus by completing the Panama Canal and connecting the waters of the Atlantic and Pacific oceans.

Abraham Lincoln taught himself law, served in the Illinois Legislature, then gained a seat in the U.S. House of Representatives. In 1858, he challenged Senator Stephen Douglas and - through wit, wisdom and a series of historic debates - won the admiration of the American people, though he lost the election.