What is Crazy Horse Memorial?

Crazy Horse Memorial, the world’s largest sculpture, now in progress, is located in the Black Hills of South Dakota just 17 miles southwest of Mount Rushmore. The work was begun in 1948 by sculptor Korczak Ziolkowski at the request of Native Americans. Korczak died in 1982. His wife, Ruth, and their family continue the project working with the Crazy Horse Memorial Foundation. 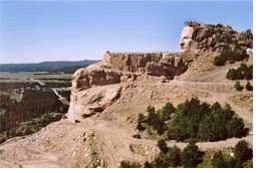 A monument is being carved into a mountain. Korczak Ziolkowski began the sculpture in 1948. His wife, Ruth, and their family continue the project working with the Crazy Horse Memorial Foundation.

Why was Crazy Horse chosen?

Native American Leaders chose Crazy Horse for the mountain carving because he was a great and patriotic hero. Crazy Horse's tenacity of purpose, his modest life, his unfailing courage, and his tragic death set him apart and above the others. 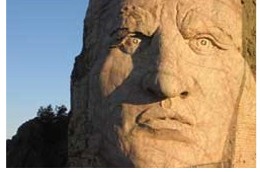 He is a hero not only because of his skill in battle, but also because of his character and his loyalty to his people. He is remembered for how he cared for the elderly, the ill, the widowed, and the children. His dedication to his personal vision caused him to devote his life to serving his people and to preserving their valued culture.

Crazy Horse died young, his life tragically cut short. His spirit, however, remains as a role model of selfless dedication and service to others. Today, his values and his story serve as an inspiration for people of all races.

›My fellow chiefs and I would like the white man to know that the red man has great heroes, too.‹
Henry Standing Bear (Oglala Sioux), 1939 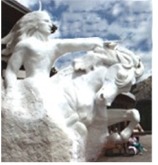 Why did Korczak depict Crazy Horse pointing over his horse's head?

Korczak depicted Crazy Horse with his left hand thrown out pointing in answer to the derisive question asked by a white man, ›Where are your lands now?‹

Crazy Horse replied, ›My lands are where my dead lie buried.‹