If the called number is on the students' grid, they mark it. The students can do this with a pencil, so they can reuse the grid if they like. The students might also prepare more grids in advance (homework). The quizmaster goes on picking numbers and calling them out.

End of the game

If one player has marked all squares in a row - vertically, horzontically, or diagonally – he shouts: ›BINGO‹. 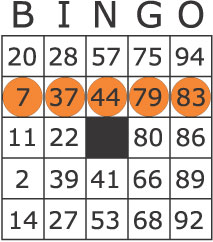 The student who has shouted BINGO repeats all numbers of his row, column or diagonal and the quizmaster checks them on his master grid. If the student has marked the numbers correctly he can be the next quizmaster. He takes all cards of the mastergrid and the game starts again. The students erase their markings or use a new grid for the next round.